Solid-state drives (abb. as SSD) are replacements for the hard disk drives (abb. as HDD) for those who wish their PCs performing exceptionally well. Technically, SSDs do not contain moving parts and thus, they are less susceptible to failure due to malfunctioning of any of them. Instead, they are constructed with a number of flash memory chips integrated inside a metallic body. Having a fairly less number of internal components, SSDs are lightweight, compact, and integrated data storage devices with notably faster data read and write speed. Consequently, SSDs enhance the performance of your computer by a significant factor.

Looking at the outer core of the SSDs, you may not find them any way different from typical hard drives. However, thing are completely different at the internal level. Unlike the hard drives containing moving parts, SSDs contain flash memory chips (as mentioned earlier) that can even be compacted to reduce its size. However, the sizes of the SSDs are exactly equal to that of the HDD installed on your desktop or laptop. The reason is that they should fit in the space provided for the hard drive if you upgrade. 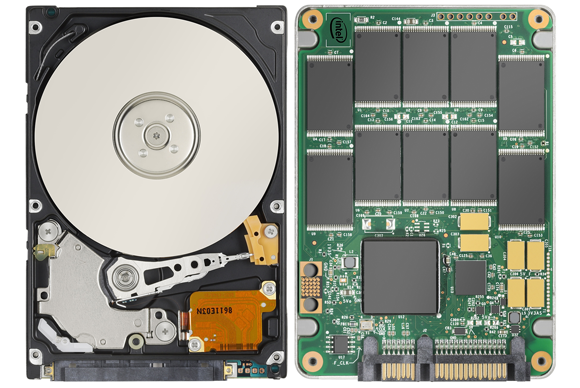 Internally, SSDs have a number of NAND Flash chips arranged in a grip, typically in rows and columns. You might know that when NAND flash, containing transistors has current, its value is 1, but if it does not, then its value is 0. Initially, all the transistors conduct current and have the value 1, which is changed to 0 for some of the transistors when data is saved to others keeping the value 1 unaffected. The process is managed as long as the flash chips are working fine and is based on the arrangement of the flash chips. The storage mechanism is based on two key transistors, i.e. Control gate and Floating gate. The flow of current begins from Control gate and proceeds onto Floating gate, thereby creating positive charge that breaks off the flow of current. This is how a pattern of 1s and 0s is created with the balanced effect of voltage.

Data read and write access over SSDs is significantly faster as compared to that on HDDs, which is not only because of NAND flash memory chips, but it is also because of smooth flow of data (as current) in flash memory chips. In fact, the performance of the SSDs is a bigger deal as compared to that of the HDDs, which considerably improves the overall performance of the computer.

The rate of SSDs to pick up one piece of data is same for every single other piece, irrespective of the location of next piece. You can experience such high flow of data in all key tasks performed by CPU, which includes system boot with the execution of system files and ranges to data read and write access speed. See the complete details below:

Apart from the aforementioned factors enhancing the overall performance of the computers, SSD are much easier to carry. However, the extent of care and efficient handling they require is not at all lesser than that is required for HDDs. In fact, you must remember that the SSDs have shorter lifespan than the HDDs do. Since the life of SSDs is measured in terms of read/write operations they undergo, they come with a specified lifetime.

When it comes to data loss, SSDs are not far off from typical scenarios portraying data loss and similar events. People do get their crucial files lost or deleted unintentionally, and then they want them back in their life. Well, the internal and external both the factors causing data loss events on the SSDs are the same as those for the HDDs.

Well, based on the type of corruption and its corresponding data loss scenario, you may or may not be able to recover lost data on your own.

In a data loss scenario, based on the cause and extent of data loss, you may need to take the help of external means. These means can be either data recovery software or the experts’ consultation in reference to the need for data recovery.

Data recovery software is helpful and recommended if you lost one or more files or folders or you have got a partition formatted unintentionally. Based on the efficiency of the software, it is possible to recover lost/deleted files and data even from formatted partitions. In contrast, if this is due to corruption or failure of one or more flash chips or the SSD itself, you need to take it to the data recovery experts for extensive checkup and data recovery, if feasible.

Data recovery expert at Stellar Data Recovery, recovering data since 1993. Playing around with hard drives, Windows OS issues and suggesting fixes is among the major activities I love.