Action sports, documentary, or music, Virtual Reality (VR) or 360-degree videos bring immersive experience for viewers. The technology excites, as you can experience real-time video content and choose what and where to look in a video.

Google introduced 360-degree in YouTube videos and so have Vimeo and Facebook. Companies like Amazon are also bringing it to enhance the shopping experience of its users.

However, not every computer, smartphone or browser can play 360-degree videos. There are specific device and platform required to upload and play them. But, mostly users are ignorant about this. This is apparent from the fact, that since the advent of 360-degree VR videos, there are several complaints of these videos not working.

This post, shares how to fix 360-degree videos not working in different situations. The video issue can emerge in computer, Android, or iPhone….Read on to know how to fix them as per your case. 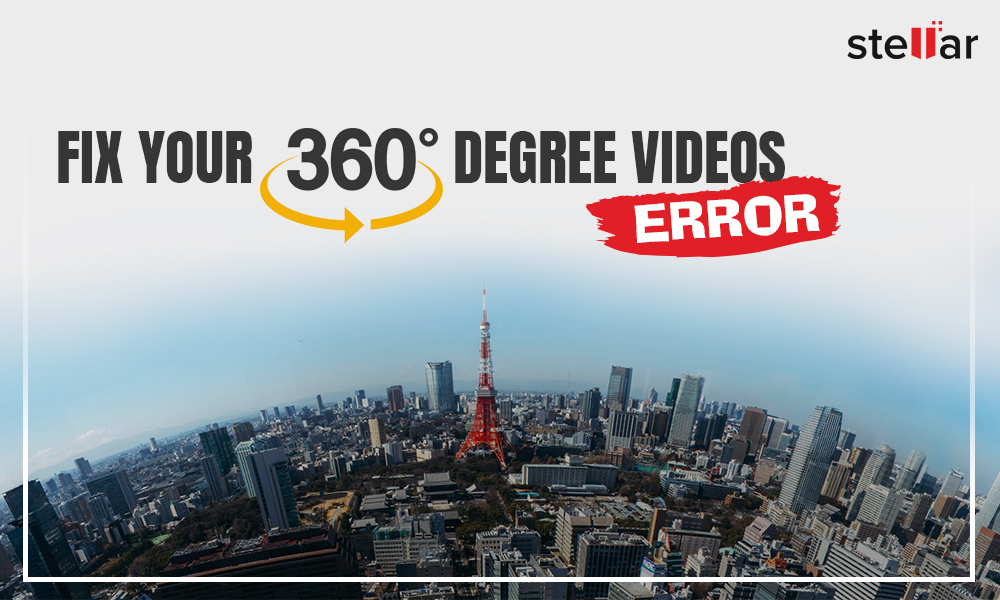 360-degree video not working on computer

1. Use a 360-degree video repair software

You recorded 360 degree VR video with your GoPro. However, when you play it on computer, it is jerky, shaky, lagging, blurry or not opening at all. It’s so because your video has turned corrupt and needs a repair. Read more on how to repair blurry video

You can repair such corrupt or damaged 360-degree videos by using a video repair software.

How to repair corrupted 360-degree videos:

Steps to update the graphics card driver on PC

Read more on how to fix NVDIA graphics cards problem.

3. Turn on hardware acceleration in PC

Are you trying to watch 360-degree videos on Windows computer? Check if the Windows’ hardware acceleration is turned on.

4. Play in a compatible browser

A 360-degree video can only play in browsers that support HTML 5 format. If you are able to watch YouTube videos in other browsers, it indicates the current browser doesn’t support 360-degree videos format. Google Chrome, Mozilla Firefox, Internet Explorer, Safari and Opera can play 360-degree videos smoothly.

Even if you are using the supporting browser, ensure it’s the updated version because older versions don’t support HTML 5 format. Thus, they won’t be able to play 360-degree videos.

Does your 360-degree video fails to upload on YouTube?

Probably the video is not enabled for YouTube upload, i.e. it doesn’t have a required metadata for 360° playback. Use a 360 Video Metadata App to enable the video for YouTube.

360-degree video not working on Phone

May be your mobile data or Wi-Fi is not working properly. So check your Internet connection in first place, when YouTube 360-degree videos are not playing.

Turn off and on your Android or iPhone. Sometimes a simple restart also fixes video playability issue in YouTube.

YouTube videos not working on Android is a common complaint. But do you know an Android phone should have a Gyroscope sensor for watching 360-degree videos?

Gyroscope sensors sense angular velocity and detect the orientation of the phone. If the VR videos are not working on phone, check if your device has a Gyro sensor or not.

Use apps like Google Cardboard and VR Checker that check devices for Gyroscope sensors and 360-degree videos support.

If your Android phone has Gyroscope and still the 360-degree videos are not working on it, calibrate the sensor. This should fix 360-degree VR videos not working in YouTube or other channels.

Whether you use an Android device or iPhone, update it to the latest version. Updates help to fix bugs and ensure the device plays VR videos smoothly.

Are your 360-degree videos not working in YouTube App on phone? Update the app from Play Store.

You can next reinstall YouTube from Google Play Store.

Under Settings on your Android or iPhone, select Apps folder. Click to follow YouTube > Storage > Clear cache. The location path may differ with your phone model.

Next play your videos in the app. The 360-degree videos not working problem should be resolved.

Hope you found this post helpful. Do share with our readers in the comments section below, how you were able to fix the ‘360-degree videos not working’ issue.