Exchange administrators might often need to export Exchange database (EDB) files into PST format. The most common reason for doing so is to extract data from damaged EDB files and access it with Outlook PST. But performing this export has traditionally been a tedious task involving quite a lot of time and utmost care.

In Exchange versions before 2010, to import/export EDB to PST, administrators had to rely on third-party utilities like ExMerge. However, Exchange Server 2010 SP1 onwards, some special PowerShell cmdlets (New-MailboxImportRequest and New-MailboxExportRequest) began coming into use to perform this import/export. Further enhancements were made over to these cmdlets over the years and in Exchange 2013, they have been extended and their performance improved.

This article will be covering the steps to import/export Exchange 2013 mailboxes to PST using these cmdlets in their new version.

Here ‘User Exporter‘ is the name of the account to which the rights are given.

Instead of handing over the rights to a single account, in many cases just to make things convenient, the rights are assigned to the AD group. In this way whenever the rights are to be given to a new account, that account only needs to be added to this group. If you wish to do the same, the syntax mentioned above will slightly change as shown below:

Here ‘ExchangeAdmGroup’ is the name of the AD group.

This process can also be done from the Exchange Admin Center (EAC) GUI. After giving the rights, you’ll need to restart the EAC. 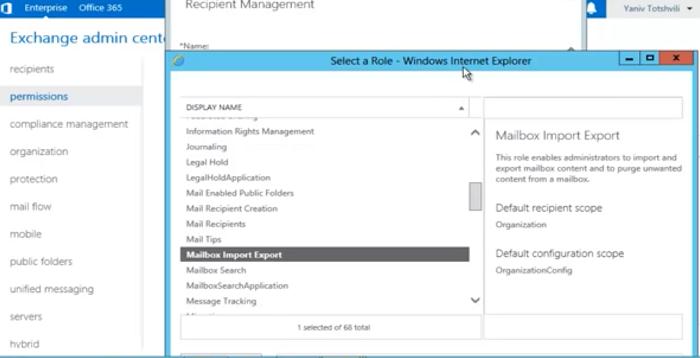 To perform the export successfully, the following conditions must be met first:

The cmdlet New-MailboxExportRequest is used to perform the export as follows:

The above command will export the entire mailbox to the mentioned PST. To export a particular folder to the PST, change this command as follows:

Similarly, in order to exclude a folder from the export, the command can be changed as follows:

As indicated, this case typically implies on the ‘Deleted Items’ folder.

If you would like to include or exclude multiple folders, you can use the comma to add more as below

If you would like to export for example the last year of the user since they requested it or if the user needs between dates, you can use the –ContentFilter for various export options like

You can further customize the command as per need. For example, to export all emails received after 1st January with the keywords “London” and “MSProject”, excute the command as follows:

If the export task is queued on the Exchange Server, you can see its status by executing the following command:

While we’re at it, let’s also check out the commands to perform the import. The basic conditions to be met before starting this process are the same as those for the export.

Once fulfilled, execute the following command to perform the import:

This command unites the contents of the existing folders in the target mailbox and adds new folders to the current mailbox folder structure. To import the PST contents into a particular existing folder of the Exchange 2013 mailbox, execute the following command:

Any standard folder of the Exchange mailbox can be used as the destination in the above command.

Once this command has been executed, the import task in queues on the Exchange Server. To see its status run:

To see the status of the import tasks in percentage, change the above command as follows:

To see the task status for a particular mailbox (for example, mailtst):

To remove the complete import requests from the Exchange Server queue:

Important Note: The import process can sometimes fail due to damage of the PST file structure or the request exceeding mailbox size limit. If a failure occurs, a detailed report on it can be seen through the following command:

You can also choose to skip some bad items of the PST files. To specify the limit of bad items that can be skipped: 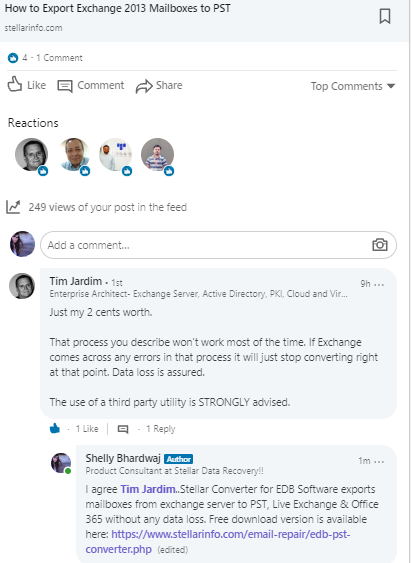 So that is the detailed process of performing import/export of Exchange 2013 mailboxes to PST format. However as you would have noticed, this process requires the execution of PowerShell cmdlets that need some form of technical expertise to handle. If you’ve never done this before and make even a simple mistake as a spell-error, the results could be disastrous including data loss. Thus, to avoid such issues, using trustworthy automated EDB to PST conversion tool Stellar Converter for EDB is recommended. This tool converts all or selected items within the EDB to PST format accurately and in minimum time.