Summary: The ransomware gang behind Cuba ransomware started targeting vulnerable Exchange Servers last year to gain initial access by exploiting the ProxyLogon and ProxyShell vulnerabilities. Spread through phishing emails or compromised user credentials, the ransomware is now encrypting the files on the compromised servers with .cuba extension and asking for a ransom. This blog explains the Cuba ransomware and steps to safeguard your organizations and Exchange Servers against Cuba or other similar ransomware attacks.

Microsoft Exchange Servers with flaws across the globe are hit by yet another ransomware termed Cuba ransomware.

The ransomware gang is exploiting the Exchange Server vulnerabilities, including ProxyLogon and ProxyShell, to gain initial access to the organizations’ network and encrypt the connected devices for a ransom.

Cuba ransomware operation started in late 2019. Initially slow, ransomware picked up the pace in 2020 and 2021. FBI had issued an advisory on Cuba ransomware back in December 2021 after 49 U.S. based organizations in at least five critical infrastructure sectors, such as IT, manufacturing, financial, government, and healthcare were compromised.

According to the FBI, the threat actors behind the attacks have demanded $74 million and received at least $43+ million in ransom payments from their victims.

Mandiant tracks (a cyber-security firm) has codenamed the gang as UNC2596—known for leaking stolen data on the groups’ shaming websites (sites where threat actors publish or sell stolen data), and the Cuba ransomware as COLDDRAW.

The report by Mandiant tracks shows that the gang is primarily targeting critical organizations based in the United States and Canada, followed by Australia, Austria, Belgium, Columbia, Germany, India, Jordon, Poland, and the United Kingdom.

How is Cuba Ransomware Gang Compromising the Exchange Server?

The Cuba ransomware is distributed via a loader called Hancitor malware—used for dropping and executing stealers, such as publically available NetSupport Remote Access Trojans or RATs, BUGHATCH, and create backdoors for persistent access and lateral movements in the targeted organizations’ network.

How to Protect Exchange Servers from Cuba Ransomware?

To protect Exchange Servers against Cuba and other ransomware or malicious attacks, follow these FBI recommendations.

Besides, patch the server immediately with the latest Security and Cumulative Updates available for your Exchange Server version.

Follow these steps to check the server’s health and identify vulnerabilities you need to patch.

The steps are as follows,

If you receive a warning or error message while running the script, run the following command to bypass the execution policy and execute the HealthChecker.ps1 script.

The HTML report is generated and stored at the same location where the ‘HealthChecker’ script is present. Open the HTML file in any browser to check the server health and patch the vulnerabilities, if any, by following the next step.

If the HTML report detects health issues or vulnerabilities, use the links to download the updates and install them. Please note that the latest security updates are available only for the following Exchange Server CUs.

Refer to our detailed guide to download and install Cumulative and Security updates on Exchange Server.

You can also follow our blog Microsoft Exchange Remote Code Execution Vulnerability Flaws and Their Fixes to stay updated about the newer Exchange Server threats, vulnerabilities, and updates.

To stay protected from ransomware attacks, organizations need to strengthen their security parameters and, most importantly, update the server as soon as possible. Ransomware gangs, such as UNC2596, often target vulnerable Exchange Servers as they are easy to compromise and gain access to.

However, if the server has been compromised or the database has been damaged due to the malicious attack, it is recommended that you set up a new identical server and restore mailboxes to the new server from your backup. If a backup isn’t available or obsolete, you can use Exchange recovery software, such as Stellar Repair for Exchange, to repair the damaged databases in your compromised server, recover mailboxes and export them directly to your new Live Exchange Server or Office 365. 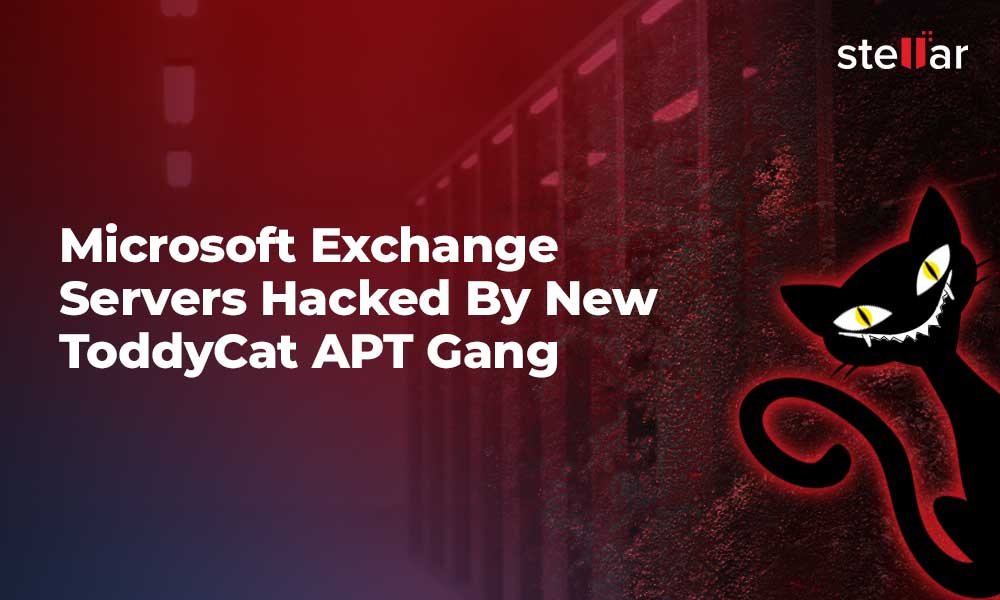