Summary: Is your GoPro troubling you? This post shares solutions to the 13 most common GoPro camera errors and video problems. The fixes are for all models of GoPro cameras — HERO 5, HERO 6, HERO 7 Black, HERO 7 White, HERO 7 Silver, HERO 8, Fusion, Max and others. It also suggests the best GoPro SD card recovery and repair software for deleted, lost or corrupt videos from the camera.

You love your GoPro camera for many reasons. It offers ample opportunity to shoot unique videos of premium quality. It is waterproof without casing up to a good 131 feet (40 m), eliminates lens fog, super tough, shock-proof, great stills, and can capture 4K 360 degree videos. But with this and a lot more to vouch for, your GoPro camera is not devoid of technical hitches.

There have been complaints about GoPro video footages not playing after import to computer, camera freezing, SD card errors, quick battery drainage, and more.

Here, we have tried to include the solutions to some of the most common GoPro camera and video problems.

Note: Before fixing any GoPro camera or videos related problem, make sure you backup your GoPro videos and photos in a PC, Mac or an external drive.

‘SD ERR’ or ‘NO SD’ message on your GoPro LCD screen indicates that your camera is unable to properly connect with the SD card. If you view this error, ensure that the SD card is fully inserted in the camera.

If this doesn’t help, format the SD card. You can format either in camera or on your computer.

Although formatting will delete all SD card videos and pictures, it will fix the issues that are causing the GoPro SD card error. While if you have missed taking backup of GoPro SD card, you can use Stellar Photo Recovery software that works on formatted memory cards and recovers photo and video files without affecting their original quality.

If your camera SD card has free space, but it still shows the error ‘SD card is full’ when you try to record videos, try formatting the SD card in your computer. Also make sure your GoPro has the latest firmware by updating your camera at regular intervals.

GoPro camera SD card may suddenly stop working if it is very old or continuously being used on multiple devices. Because of this, the SD card turns corrupt or inaccessible. You can attempt formatting to fix the issue or switch to a new SD card.

Dust could be another reason for SD card to stop working suddenly. Clean the memory card with a soft cloth and then try to access it in the GoPro camera again.

If you’re unable to access such corrupt SD card multimedia files, get an effective GoPro SD card recovery software such as Stellar Photo Recovery Premium  that can restore video and photo files from corrupt SD cards.

Video playback issue is a common complaint with GoPro users. Sometimes, GoPro videos don’t play properly, freeze, or show black screen. They are jerky or have choppy playback. There are also cases when the videos have no audio.

Most of the time the issue is related to incompatible system support. Your media player or computer may not support GoPro videos recorded using high quality HEVC settings. The other reason could be the corruption in the GoPro video.

You can do the following to fix GoPro videos playing choppy or jerky, etc.:

In case the above techniques don’t fix the GoPro video playback problem, the video file is corrupt and you need Stellar Repair for Video software  to fix the playback issue.

Video loss from GoPro SD cards can be due to many reason like accidental deletion, virus infection, interruption in file transfer, improper SD card handling while inserting or removing card from device and more. In any such scenario, to recover deleted GoPro videos and photos , use a media recovery software – Stellar Photo Recovery. It deep scans the memory card for lost and deleted video/ photo files and restores them with their original name, date and timestamp. Make sure you do not use the SD card after file loss as it will overwrite the data.

If your GoPro videos not are opening and showing errors such as ‘Can’t play video’, ‘File not found’, error code 0xc00d36c4, etc., chances are your file is corrupt. It can be due to obsolete video drivers on your PC, malware, improper file transfer, and others. You can repair any corrupt MP4 or MOV video file from GoPro HERO5, HERO6, Fusion or other models by using Stellar Repair for video software on your Mac or Windows PC. You may also once try to fix GoPro video error with VLC Media Player as the player also has a video repair feature that fixes minor corruption issues.

GoPro can withstand extreme temperatures. But some HERO 6 and HERO 7 users complained about the camera freeze when the device is underwater or at high altitude. The problem is temporarily resolved by removing and reinserting the battery.

If you are facing such problem, update the GoPro camera software. If your camera is in frozen state at present, try to reset it by holding the ‘Mode’ button for 10 seconds. On HERO Session/ HERO4 Session camera, hold the top ‘Shutter’ button. Before doing this, turn off Wi-Fi, GPS, remove any battery BacPac and all other connections.

HERO3 cameras usually run into this problem. You can do the following to fix the problem for any GoPro camera. Remove and reinsert the GoPro battery. Press the Power button to power on the camera. The update should now be completed. If this doesn’t help, update the camera manually.

The failed export error ‘No outputTopVideo and outputBottomVideo’ occurs when you export a video in the GoPro Player in macOS.

If the export fails every time at the same point, it’s possible that the section of that video file is corrupt. You can trim that section from the video to fix the issue or use a video repair software to repair the corrupt GoPro video.

The error can also appear when GoPro SD card isn’t fast enough. Make sure you are using the recommended SD card in your GoPro action camera.

You want to edit your video footage in GoPro Studio on computer. But the videos won’t import into the GoPro Studio interface. You may see an error message like ‘Unable to play file. File may be corrupted or in an unsupported format’ or nothing happens as you select and import the video file.

To fix the problem, make sure:

If you are still facing issues, check if the videos are playing in VLC Player or QuickTime to rule out any corruption issue. To repair corrupt or damaged GoPro MP4 or MOV videos, use video repair software.

Battery BacPac is used to extend the life of your GoPro HERO camera. But sometimes you may face audio problems after connecting BacPac.

This happens because you may have not properly updated your GoPro software to function with the Battery BacPac. Update your camera software again to fix audio problem in HERO.

12. Unable to open GoPro MP4 videos after transfer via Quik

Video files imported in computer using GoPro Quik app for Windows Desktop, sometimes don’t play. It may be because your MP4 videos files are large so couldn’t be completely transferred or there was abrupt interruption during file transfer due to which the videos got damaged. Use a GoPro video repair tool, and see if you can fix such corrupt MP4 video files on computer.

Are you facing ‘quick battery drain’ problem in your GoPro camera? It could be because of too many features enabled at a time on your camera like voice control, WiFi, and GPS, etc. So turn off all the features if not in use.

Very low temperature in cold environment can also drain battery faster, for instance when camera is underwater or during snowfall. So keep the camera at a warm place. Also, if your GoPro camera battery is very old, it will drain faster. Replace it with new one.

The high-end GoPro cameras are not free from technical hiccups. To avoid GoPro camera errors and video playback issues, it is essential to keep your camera software updated and use the SD card recommended by the manufacturer for various camera models.

In uncalled situations related to GoPro video loss or corruption, you can use the professional Stellar video recovery software that can recover as well as repair corrupt videos.

Further, if you were able to resolve any GoPro camera or video issue, do share with our readers in the comments box below. 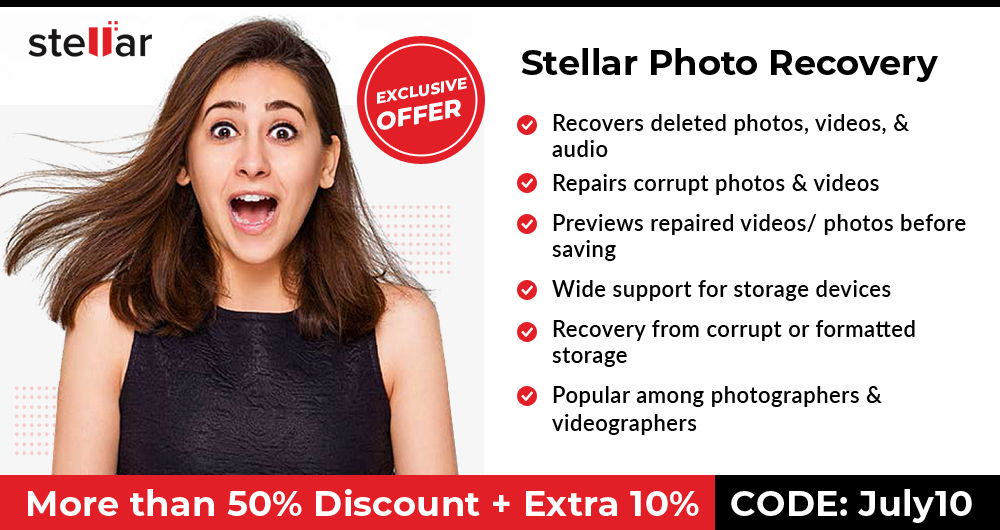