How does an Exchange Server database get corrupted?How we can fix corruptionin Exchange database?

An Exchange database is made up of log files and EDB file.Both files are dependent on each other. Why is that? If the database is directly opened by users or applications, the database will be locked and easily damaged.So cache and log files act as buffer between the user/ application and the database for performance and health. Likeany other file, it can get corrupted for various reasons, which are:

In case of a sudden power cut,the server is turned off without prompting, which means that the database could still be open while the power is lost. This maycause database corruption.Any third-party applications like backups and antivirus,which are not Exchange Server compatible,would hinder or stop the Exchange Server from working as it should be while locking the database files. Viruses and other malware code like Ransomware, apart from wreakinghavoc on your server, can also corrupt thedata.

One mightsay that this would not be a big deal since the server and database can be restored from backup as it's a virtual machine. On the other hand, the backup is usually done during the night.However,looking at businesses these days, email flow is increasing by the minute while business is moving more on the cloud and depending on emails. So if the databasegets corrupted in the middle of the day, restoring from last night's backup would result in loss of whole dayemails. Not just emails, but also loss of tasks, journals, calendar meeting and other data which is stored in public folders and other collections.

Before we start working on the EDB, using the native tool EseUtil, we need to take a backup of the database somewhere on our network just in case we would need Microsoft's support (it will be explained later, why we need this). Another thing we need to see that there is enough space on the server for the recovery process.

On the Exchange Server, open command prompt as Administrator and browse to the location of the affected EDB file. Type the following command to get the status of database. 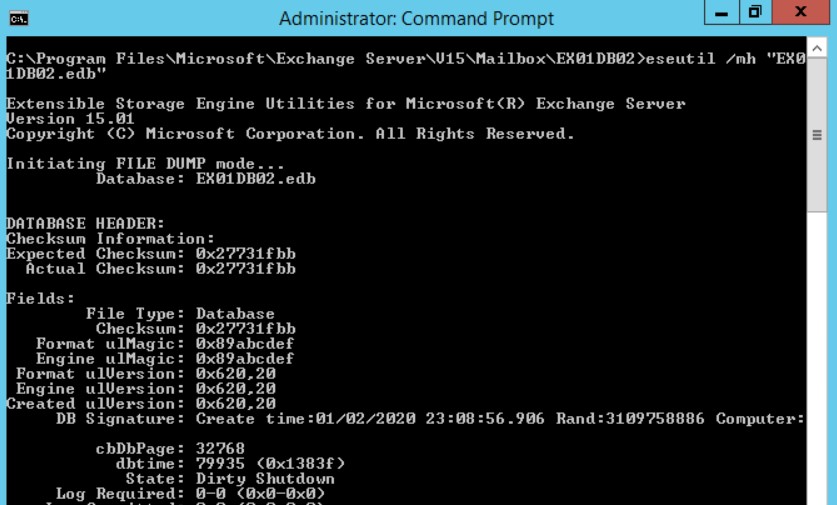 In addition, before running a hard recovery, make sure that you have the same amount of free space as that of the database size.

Remember we said above about backing up the database? The reason being that if you run a hard recovery on the database, Microsoft isnot bound to assist, and itcan get this information from a hidden parameter in the database. 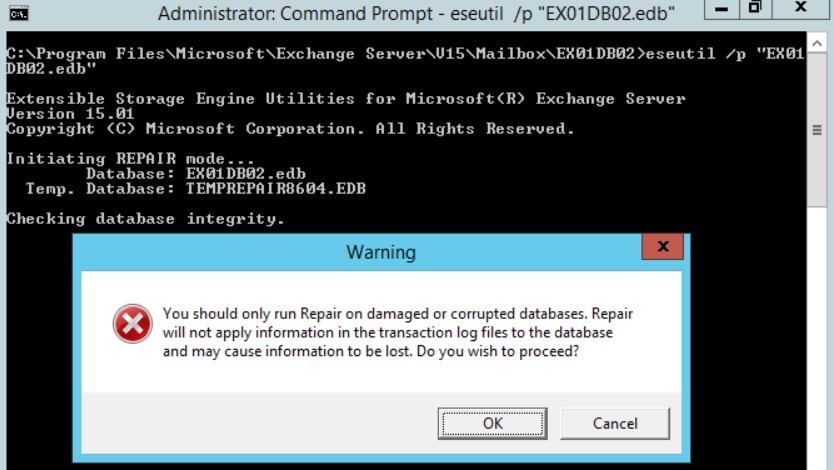 After this is done, you would be able to mount the database.

What are the challenges of using EseUtil for recovery? Well, the worst part is the data loss when using the hard recovery. The other thing is the resources needed like space and administrative effort.

A better alternative to this is to use Stellar Repair for Exchange. Exchange Database Recovery software enables you to repair corrupt databases, export data from one or multiple EDB files, export EDB files directly to live Exchange database or Office 365. How you benefit from this? Well, the downtime will be reduced by 75% and the company will be back in business in no time and with minimal data loss.

Is it safe to run eseutil /p on the database?

If you are using eseutil/p command, it is safe if you have in-depth knowledge of the command. Also, don't stop the process until it completes as it can corrupt the database file.

How much time eseutil/p process is going to take?

Eseutil utility runs at approximately 3 to 6 GB per hour, and defragmentation takes 9 GB per hour. The exact timedepends on your hardware and production environment.

Make sure you have enough space (at least 110 percent of the current database you're repairing) on the drive where you are performing the repair. It is also recommended to disable virus scan temporarily, while you perform the repair.

78% of people found this article helpful

How to Use Get-MailboxDatabase Cmdlet?

How to Build Exchange 2019 from scratch: Configuring a DAG